Original Article Published on HBM006
INTRO
One of the biggest satisfactions for an AFOL is when a friend or a relative mentions that they
have a couple of sets at home from their childhood, and that they are willing to give them to you. That excitement of not knowing what you will get is just as big as the dirt layer that usually covers said gifts. Bread crumbs, dust bunnies, hairs, and the usual Playmobile items nobody knows how they ended up there... you name it.
Also, when buying a second hand set, it isn't rare to receive them with lots of dust or dirt.
So, it's time to clean those parts and bring them back to their former glory. As an example, Gobernador will use the set his friend Pucelabricks gave to him. A classic LEGO® relic, the 6680, a set from 1981. The condition when received was good, but it had quite a layer of dirt.
Blastem has also used the 8862 to graphically explain the cleaning process for a Technic set. The
focus is different since Technic obviously has a different kind of pert assortment compared to LEGO System, and in a way they need a different treatment.
ABS PLASTIC
Most LEGO parts are made out of a material called Acrylonitrile Butadiene Styrene, an industrial plastic with qualities that make it perfect for the creation of our little bricks.
But what are these qualities we are talking about?
- Sturdiness and rigidity
- Resistant to hits
- Shiny, with the possibility of being coloured
- Resists low temperatures, as well as the high ones
(though it isn't recommended to expose it to
temperatures above 50°C)
These qualities are important, since they will be the guidelines we will use when applying the cleaning process.
PUTTING THE DUST AWAY
When we are just facing dust, that silent and stubborn enemy of ours, the solution is easy.
First we have the good old duster, basic but effective. We just have to use it lightly between the
parts of the different sets, making all the movements in the same direction.
For heavy dust, we can use an air compressor, like the ones we can find in gas stations or car cleaning centers. We can also use a gas duster (canned air) like the ones they sell in hardware stores for cleaning computers and the like, but while they are the most effective ones, they are rather expensive.
WASHING
GETTING READY
For giving parts a good automatic washing, the first thing you need to get is a big washing net. Using it will prevent the parts from floating around in your washing machine.
You should also get small nets (the ones used for detergent tablets). Many detergents give the nets away when you purche them, but you can probably call their hot-lines ask for a free one as well. 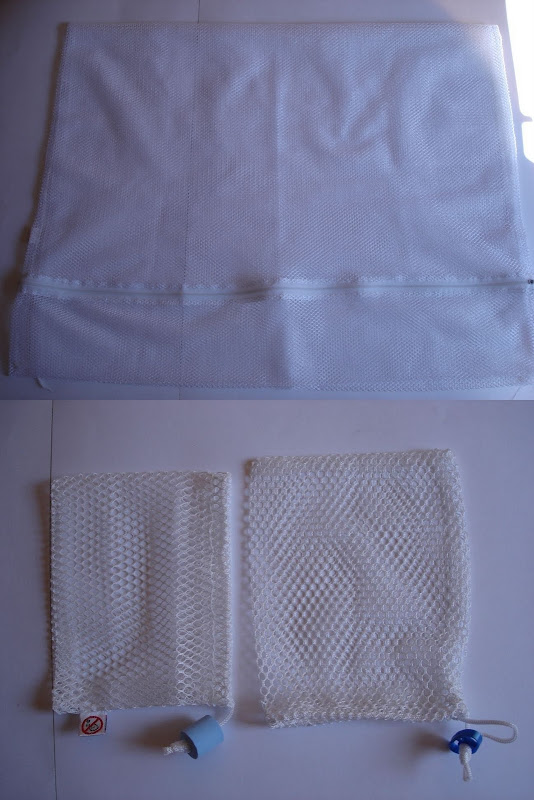 If you don't have any, you can also use a long string, as we will show later on, but it is recommended to at least have one net for those small parts (axles, pins, plates, bricks 1x1, etc...).
The most important thing during this process is selecting what parts we want to wash. We need
to have in mind that we can't put pneumatics, electric parts, printed parts, parts with stickers, or transparent parts in the washing machine since they would be ruined. Also we should be careful with long and thin parts, like the Flex system, flags and minifig accessories, since they could bend, break or go down the drain. But we will take care of them later.
To make a good selection, we have to divide the plates, bricks and other kinds of parts, since they tend to connect and excessive weight in each bag doesn't give a good result. As we can see in the picture, each kind is separated in its own pile, making the washing and selection process easier later on. 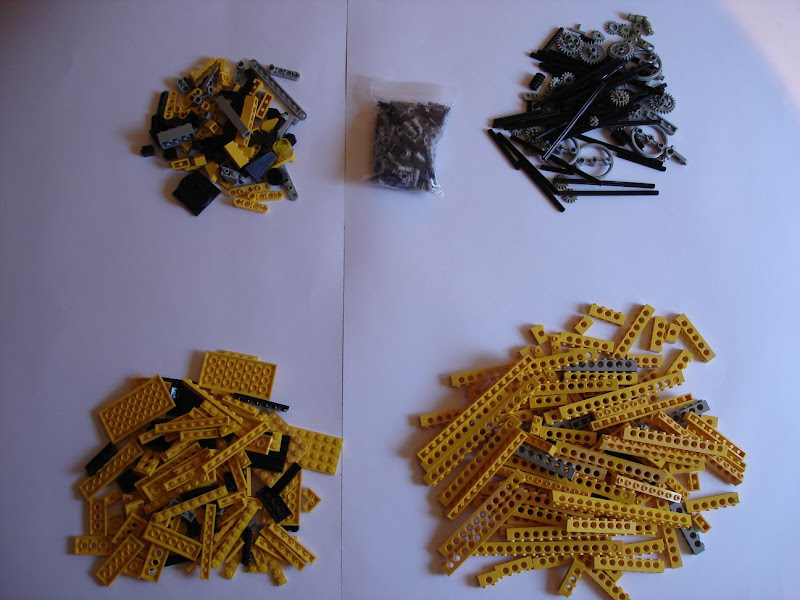 A good way to classify parts would be:
- Bricks
- Liftarms
- Technic Bricks (They could go together with the Liftarms depending on the amount)
- Big Plates
- Plates (all the other kinds)
- Axles and Gears
- Pins and Bushes
- Minifigs without any printed parts, with all the parts separated (legs, torso and hair, the head's printing could get erased, so cleaning them with some cloth instead would be recommended)
- Transparent parts
Parts that are excessively big, such as buckets, tires, walls, ship hulls, rocks, etc, should be divided from the rest and washed separately. In case we are using a dishwasher, we could simply put them on the tray. 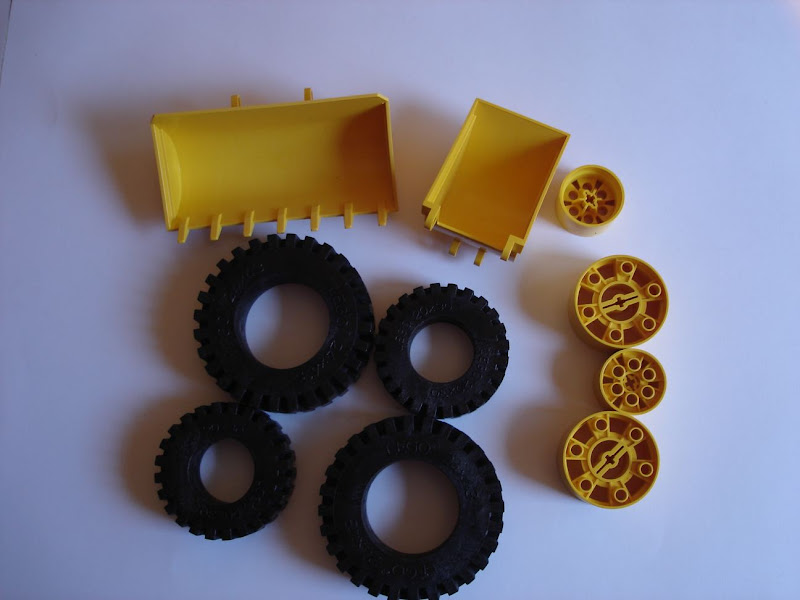 Some elements we recommend not to wash are the ropes and nets that come in some sets. They are rather delicate and probably wouldn't stand these washing processes.
We also don't recommend washing sails, except in extreme cases. One thing we can do instead is
ironing them, as any piece of clothing, once ironed they look as new!
Sorting the bags is pretty easy. In the corners of the big bag we should put some of the biggest parts, or the ones we have the most of (those without individual bags), such as bricks or plates. With a string we should tie each pile so they don't get mixed, but leaving enough space for the parts to move a bit. We should just keep placing the tied piles inside the bag. 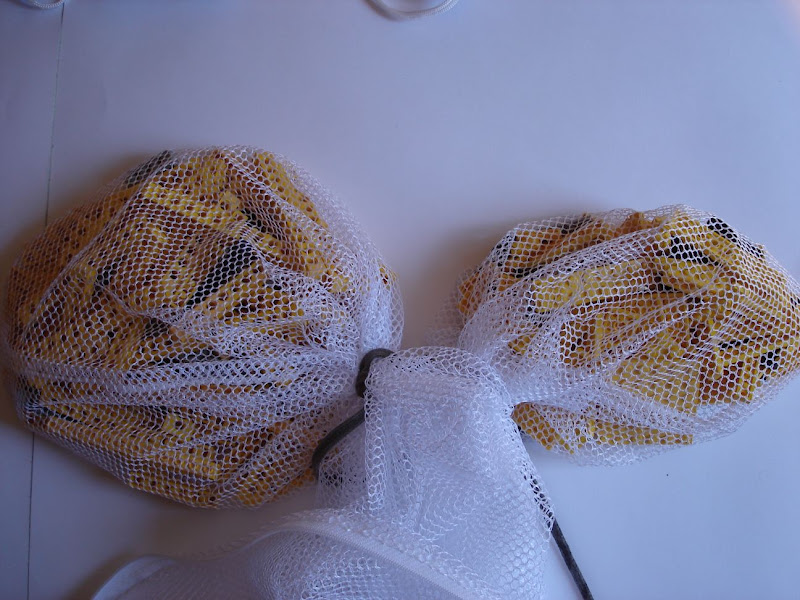 After that, we should put the small bags filled with the tiny parts in a way so they are all together but with with enough space between them. We should tie these as well. 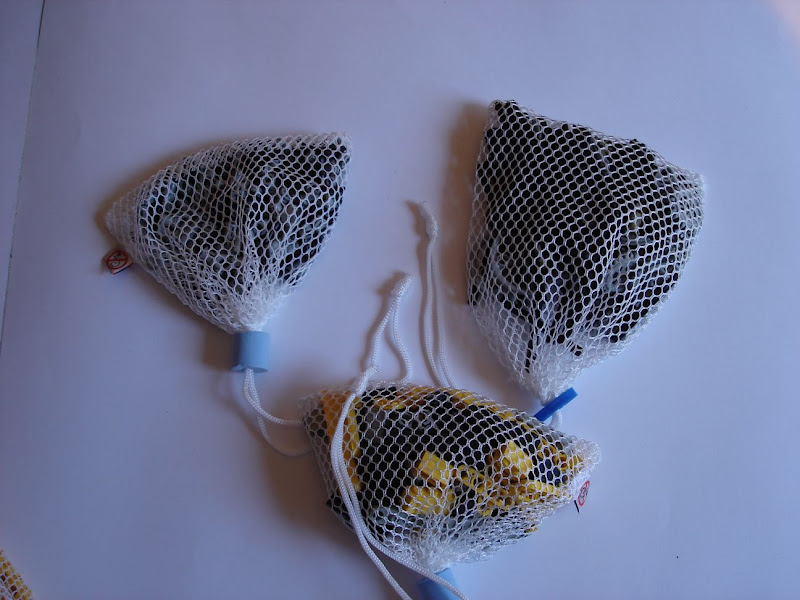 Finally, we should just add the biggest parts we have left, loose so they don't smash into each other.
If you are patient enough, you can clean these manually, but if you are looking for speed, you won't have any problems with this method. Once ready for washing, it should look like this. 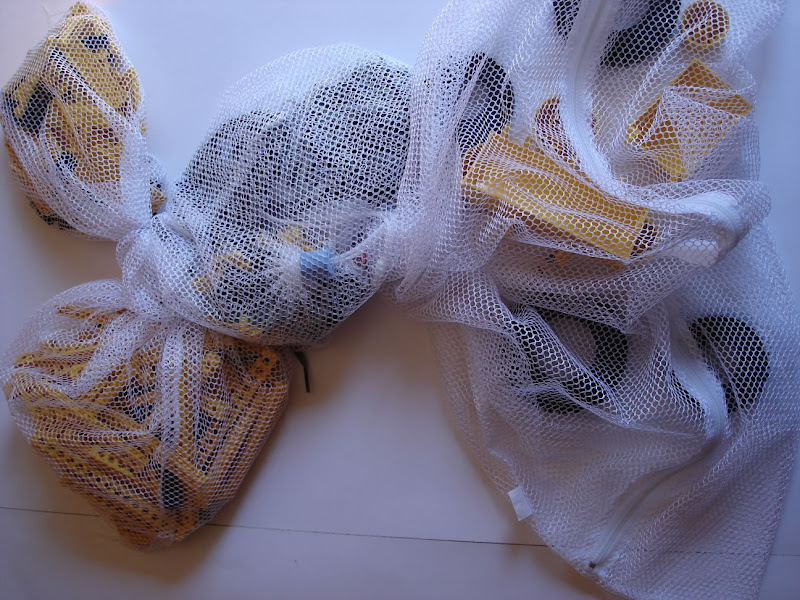 WASHING
Obviously, the main point of all this process. It is really important to consider these points when
setting the washing machine or the dish washer:
Washing Machine:
- Set it for delicate clothes, with cold water or at around 30°C temperature. In the LEGO® catalogues 40°C was mentioned, but we only need it that hot if the dirt doesn't go away.

- The lowest possible spin setting. If it is higher than 600rpm, we should avoid it.
- Extra rinsing, if the washing machine has that setting.
- Detergent for delicate clothes. It is the best choice since it isn't as abrasive as the normal kind, and it protects the surface of the plastic better. If your parts have too much dirt, you might need to use bleach, but be careful, use bleach with some protecting agents. It is a bit more expensive, but a squirt of it makes the parts really clean.
Dishwasher:
- There is only one thing we have to take into consideration when using the dishwasher: the water temperature. It should be at around 30°~40°C.
- The advantage of using a dishwasher is that it doesn't spin, thus the parts don't suffer as much. But on the other hand, they come out with more water and we have to pay more attention to the drying process.
- As long as we don't put the parts through too many washing cycles, any detergent is good.
Here is a description for the rest of the parts:
- Elements that are really thin, delicate, printed or plastic parts from electric elements and pneumatics: 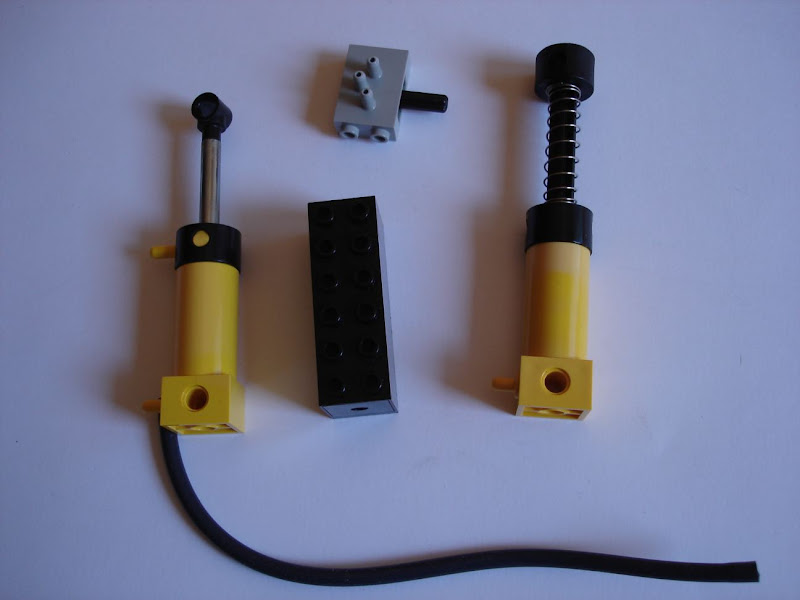 First we moisten some cloth with soapy water, and clean the surface until we get the desired result. Delicate parts like those with stickers are better left alone. Printed parts are fine.
With another cloth we rinse them, and they'll look just like new.
- For the transparent parts, which tend to get scratched easily, use some moist towels for cleaning glasses.
- For the metallic parts in the pneumatics first we clean them with some dry cloth and rub them with mineral oil afterwards. You can get the kind used for the razors in hair-cutting machines or electric motors. It usually isn't too expensive, and a small can will last long.
- For the metallic parts within electric elements, first we clean them with a moist cloth and right afterwards with a dry one. We should make sure they are completely dry. If the contacts are rusty, we should use sandpaper with fine grit. Most of the times, a toothbrush is enough though.
- For those parts with lots of nooks, like the pneumatics, or some bricks where the dirt is encrusted, we should use a toothbrush or a cotton swab.
There are many times when the washing machine isn't enough for putting all the dirt away, but it helps a lot.
DRYING
Once we're done with the washing, we'll pull the parts out of the net separately. If you used the
dishwasher, you should pull out the big parts first and dry them with some cloth, because stains and marks tend to stay if you don't.
To air dry the parts, we need to put them with enough space between them, or shake them every now and then. A good tip is leaving the big parts (like big plates and bricks) separated and leaning on the studs. They will dry perfectly. 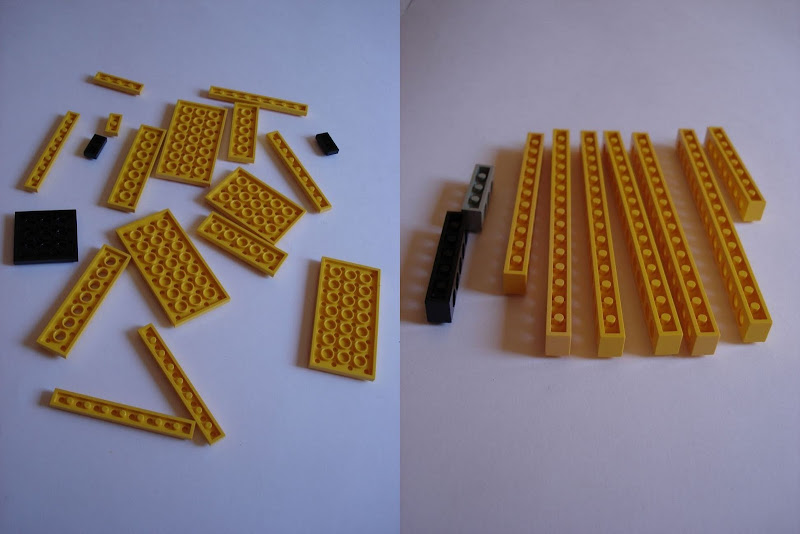 Parts like pins, bush axles and gears, can be put on top of some cloth. If we leave them inside the net, they will take a long time to dry.
It isn't a good idea to leave them close to something warm, since the parts might get deformed with the heat. Something to highlight is that you should NEVER put the parts in the sun to dry. It bleaches the parts and might even deform them. One of the main problems linked to this is the yellowing of the parts.
If we are patient enough, we can dry them one by one, using some cloth made of a synthetic material (cotton leaves some rests). Afterwards we leave them so they dry completely.
The big parts will dry without any problem. If we want them completely shiny, we can use some clothe on them.
I hope this tutorial is useful for your new purchases and maintenance of bricks!
Publicado por Unknown en 8:40 No hay comentarios: 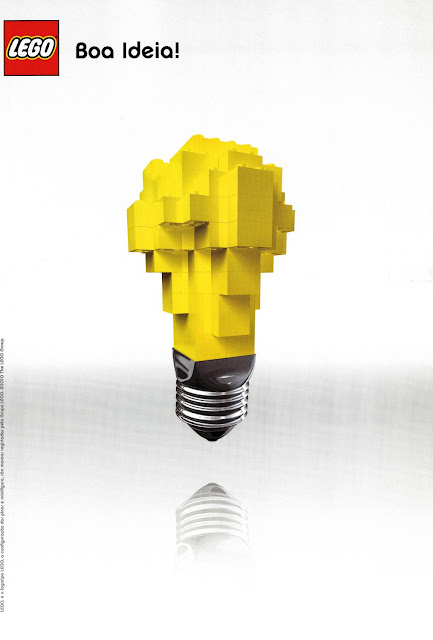 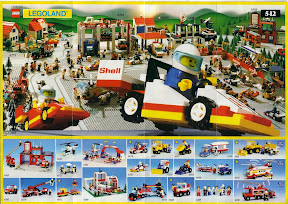 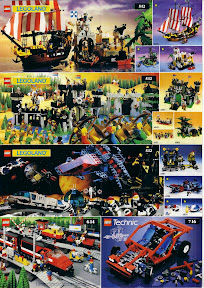